Tomorrow at the Mall

George Carlin - Life is Worth Losing 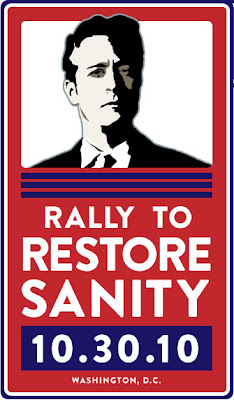 and I am so thankful for all of the friendships i have made
Films by Gabriel Abrantes
and in collaboration with Benjamin Crotty, Daniel Schmidt, and Katie Widloski

I am launching a book at Letra Livre, next to ZDB, tonight at 22h00. It is titled and I am so thankful for all of the friendships i have made, and focuses on my films and the collaborations with Benjamin Crotty, Daniel Schmidt, and Katie Widloski. Design by Silvia Prudencio, published by Centro Cultural Vila Flor, and texts by Christophe Kihm, Alexandre Melo, João Ribas e Ivo Martins.
I hope you can make it.

and I am so thankful for all of the friendships i have made, com direcção de Gabriel Abrantes e design gráfico de Silvia Prudêncio, reúne textos de Christophe Kihm, Alexandre Melo, João Ribas e Ivo Martins.
Posted by Pansy at 4:50 AM 1 comment:

). In describing the natives, Columbus wrote: "They go as naked as when their mothers bore them, and so do the women, although I did not see more than one girl. They are very well made, with very handsome bodies, and very good countenances."

1520 - Fernão de Magalhães arrives at Tierra Del Fuego on the Pacific Ocean. At 52°S latitude the fleet reached Cape Virgenes and concluded they had found the passage...The strait is now named the Strait of Magellan.
1774 - First display of the word "Liberty" on a flag, raised by colonists in Taun

ton, Massachusetts and which was in defiance of British rule in Colonial America.
1805 - Battle of Trafalgar, Adm Nelson defeats French & Spanish fleet & dies

1861 - Battle of Balls Bluff, VA (Leesburg, Harrison's Island)
1878 - German republic chancellor Bismarck declares end of Socialism. The Anti-Socialist Laws or Socialist Laws (Gesetz gegen die gemeingefährlichen Bestrebungen der Sozialdemokratie) were meant to curb the growing strength of the Social Democratic Party. http://en.wikipedia.org/wiki/File:Bismarck_removing_his_helmet.gif
1879 - Thomas Edison perfects carbonized cotton filament light bulb
1915 - 1st transatlantic radiotelephone message, Arlington, Va to Paris. AT&T announced: "Transatlantic wireless telephony is an accomplished fact. Observers listening at the Eiffel Tower in Paris have heard speech sent out by engineers of the American Telephone & Telegraph Co. from apparatus developed by that company and the Western Electric Co. and installed at Arlington, Va. The equipment used was that employed a few weeks ago in talking 4,900 miles by wireless telephony to San Francisco and Honolulu."
1948 - Facsimile high-speed radio transmission demonstrated (Washington DC)
1948 - UN reject Russian proposal to destroy atomic weapons. Earnest international efforts to promote nuclear non-proliferation began soon after World War II, when the Truman Administration proposed the Baruch Plan in 1946. The Baruch Plan drew heavily from the Acheson-Lilienthal Report, and proposed the verifiable dismantlement and destruction of the U.S. nuclear arsenal (which, at that time, was the only nuclear arsenal in the world). Andrey Gromiko, representing the Soviet Union, rejected the American proposal and countered with a soviet plan similar to the Acheson-Lilienthal. Determined to have guarantees based on inspection, the US administration rejected the Soviet proposal. 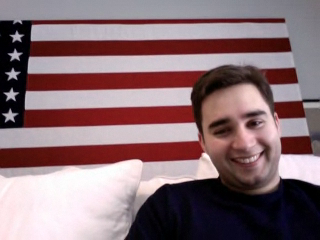 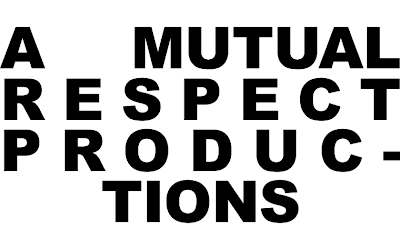 Hey, just started a new company for the production of my films.
Check out blog and become friends on FACEBOOK!

We are doing a casting this weekend. More info here.

Mutual Respect is a film production company established in 2010 in Lisbon. It's main ambition is to find alternative and flexible means to produce moving image based works and films of an innovative and experimental nature.
Posted by Pansy at 11:32 AM 2 comments:

The World at Night

Click the pictures or this link A better version by Cinzano, Falchi and Elvidge can be found HERE. See Cabinda? These are the oil rig flames... 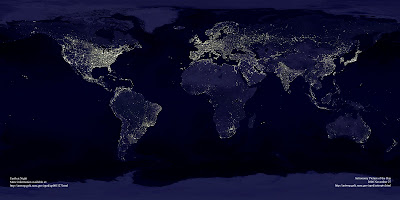 Nobel Prize in Physics & his hamster

Two days ago, Andre Geim and Konstantin Novoselov were awarded the 2010 Nobel Prize in Physics "for groundbreaking experiments regarding the two-dimensional material graphene". Graphene is a bright new star in the sky of materials science and physics of condensed matter. Geim and Novoselov were the first to isolate graphene, and show a graphene crystal in an ordinary optical microscope. Graphene may replace diamonds in rings and pendants, as it is very strong, transparent and perfectly conducts electricity and heat. Its properties allow addressing it as a "wonder material" with many possible technological applications from ultra-fast transistors to DNA sequencing; and it shows ideal optical properties for making transparent electrodes, used in LCDs.
Graphene isolation was a funny accident. Researchers, who supervised a Chinese PhD student, gave him a large piece of graphite and told him to make it as thin as possible. The stu 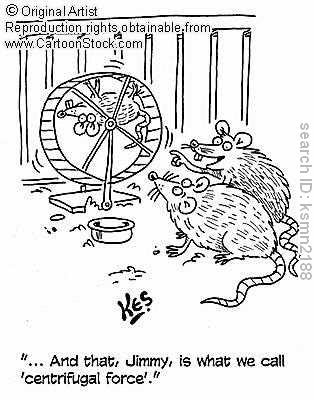 dent sawed it till 50 microns, but all further attempts led to graphite dust. Konstantin Novoselov once paid attention to work of a researcher from a neighboring lab, who used well-known technique, called “scotch tape method”, which is simply sticking the tape to graphite and ripping it off, for getting thin graphite layers. Novoselov got a piece of scotch, used by that researcher, from a trash bin and – voila. Carbon material, stuck to the tape, showed all properties, predicted for graphene.
Both researchers have received their higher education in Russia, Moscow Institute of Physics and Technology. Novoselov shares with Geim gecko tape and Nobel-Prize winning graphene work. In 2001, Andre Geim co-wrote a paper with H.A.M.S. ter Tisha, his pet hamster. The cite to what will surely become a collector's item, is: A.K. Geim and H.A.M.S. ter Tisha, Physica B 294–295, 736–739 (2001) doi:10.1016/S0921-4526(00)00753-5
Sources: Russia info-center and The New English Review
Posted by Joj at 1:33 PM 1 comment:

Ancient Roman helmet up for auction 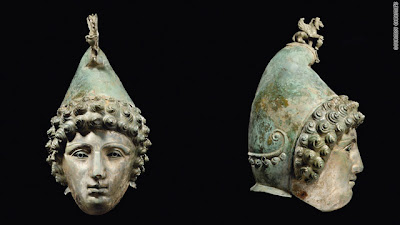 Debt Crisis Dims IMF Outlook
Not all quiet on the currency front
China, U.S. Square Off Over Yuan
Posted by Joj at 5:58 AM No comments:

Green the Army Now
Posted by Joj at 5:43 AM No comments:

Sex in the country 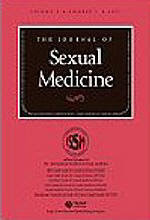 The National Survey of Sexual Health and Behavior (NSSHB) was published today in the Journal of Sexual Medicine. The survey, conducted by the Center for Sexual Health Promotion in Indiana University's School of Health, Physical Education and Recreation, asked nearly 6,000 adolescents and adults 14-94 about their sexual activity and practices, updating the results of similar research done 20 years ago.

Awesome dude - you are getting older and older, one day you'll be an old man like your bro.
Miss you and wish I was in Lisbon with you.
aa
Posted by el greco at 5:19 PM No comments:

Listen to the third minute http://www.youtube.com/watch?v=scbo-MU2gbE

Bruce Springsteen - Dancing In The Dark The Brian DePalma-directed video, set at a live performance, is perhaps best remembered for the appearance of Courteney Cox as a fan who is invited on stage by Springsteen, and dances with him. The video was filmed on June 28 and June 29, 1984 at the St. Paul Civic Center in St. Paul, Minnesota, before and during the initial show of the Born in the U.S.A. Tour.
Posted by Joj at 5:04 PM No comments:

BORN IN THE USA 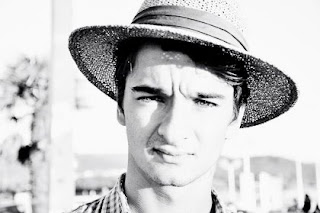 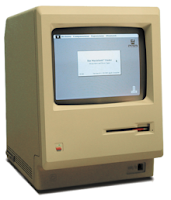